This blog post is written by one of JS Chat's participant Tristan Que. You can find Tristan on...

Hi! My name is Tristan! I'm a second-year CS major at UCLA, and I'll be interning at Yahoo! this upcoming summer.

When I started to learn about React functional components, I was really confused about how each hook is used. I felt that I knew how each hook works by reading the documentation, but I was pretty lost on how and why they are useful. Like everyone, I started off by only using useState and useEffect, and was always confused by useEffect.

However, when I had more and more experience with React, I found out I need to use different hooks for different purposes. At that time, I started to summarize how each hook could be used and gradually realized how powerful hooks actually are. It takes me multiple projects to fully understand how each hook is used, but they could actually be boiled down to a few use cases with a few examples. I hope when I was learning hook, React documentation could list these use cases.

So, I decided to give a summary on a few interesting hooks. Each hook is introduced by a problem that cannot be easily solved using basic hooks, and details for the hooks follow the problems. I hope you find them helpful, and enjoy studying!

Consider the following example where we try to build a counter to count how many times the user clicks on the "click" button after the start, and print the results through alert:

Before we delve into the demo, consider the following questions:

Unfortunately, our first attempt to build a counter failed. If we want to register a timer and count how many times the user clicks on the "click" button, we would like to know the immediate value before the alert. However, as we discussed above, each render has its own "everything", there seems to be no way for us to register a handler in one render and use the state from another render.

However, there is a way to bypass the constraint of the React functional components — useRef.

Bonus: From JavaScript's functions' perspectives, this problem is also known as the "stale closure". Here is an example you can try out to learn more about it!

useRef() returns a mutable ref object whose .current property is initialized to the its argument (initialValue).

The returned object will persist for the full lifetime of the component.

In other word, when we create a ref object, it looks like this:

But what's more interesting is the second property: the ref object will persist for the full lifetime of the component. In other words, useRef will give you the same ref object on every render. Let's go back to our previous example, except this time we add useRef:

In this example, when the async function is defined inside setTimeout, it saves a reference to the variable it uses, i.e. latestCount.current is set to count. When we click on the click button, the current attribute in latestCount is updated. Since this latestCount is the same ref object on every render, when the async callback is called, it returns the value in the only latestCount. That's why you could see a value equal to the number of times you clicked after the start.

However, in addition to dealing with the weird features of React lifecycles, there is a more common usage of useRef — create a reference to the node in the DOM.

Before delving into the common usage of useRef(), let's meet our old friend DOM and a new friend virtual DOM.

The DOM stands for "Document Object Model", which is the data representation of the objects that comprise the structure and content of a document on the web. It is represented as a tree structure. Because of that, the changes and updates to the DOM node are really fast. However, after changes, it needs to re-render the UI, which might trigger changes to the parent of nodes, children of nodes, or even the entire document tree, which is really slow. In order to counter this performance loss, React uses a virtual representation of the DOM, i.e. the virtual DOM with optimization techniques to boost rendering speed. 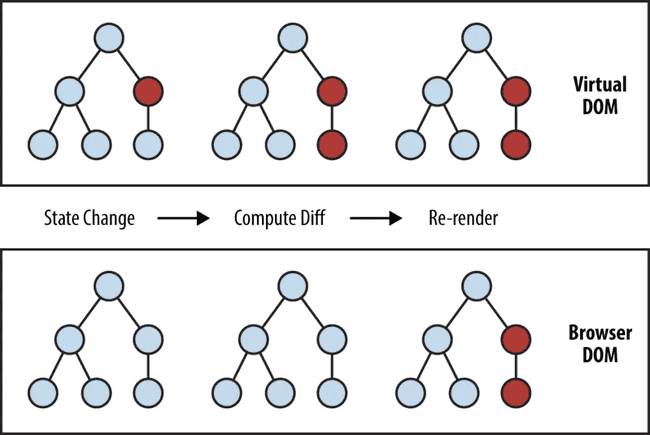 Virtual DOM enables the declarative API of React. You tell React what state you want the UI to be in, and it makes sure the DOM matches that state. This abstracts out the attribute manipulation, event handling, and manual DOM updating that you would otherwise have to use to build your app. Also, for better performance, Virtual DOM does a process called reconciliation, which include processes like "diffing" (only updating objects that are different by comparing previous virtual DOM tree) and "batch updating".

However, this abstraction of the DOM sometimes causes trouble when we truly want to access the DOM directly in React. This is where useRef comes into play. (P.S. useRef is not the only way to create ref in functional components, but it is the most common way). By creating a ref using useRef and pass the ref object to the DOM node, React will set its .current property to the node whenever that node changes.

Let's demonstrate this by an example.

In this example, we notice that our dropDownRef starts with a value undefined when the component is not rendered. However, after clicking on the open button, the node is changed and ref.current is set to <li style="background: lightblue; width: 100px;">…</li> . When we close the dropdown by clicking out the dropdown or click on the close button, the current attribute is set to <li style="display: none;">…</li> .

In the previous example, notice that we registered a useEffect that helped us detect whether we clicked out of the dropdown and closed the dropdown correspondingly. This logic might be useful across different React components. Is there a way to replicate this logic and use it multiple times?

In fact, in React, you can create your own hooks. Let's take a look!

In the above example, we create a custom hook called useClickOutState that wraps our "click out" logic above into a component. It is a function returning a state, a setState handler, and a ref object we can use to specify which component we want to use to detect "click out". Then in our App.js, we can simply initialize the hook and use them. Hooray!

In fact, there is nothing special when you want to create your own hook. However, there are a few benefits when creating hooks with use signature at start:

Suppose we're building a sign-up form on the client side. For this form, we require the user to enter the user name, password (& confirm password), and email. The user could submit the form or clear the form. You might be familiar with how to implement a form using useState, so you came up with the following implementation (We ignored the confirm password check on the client side): 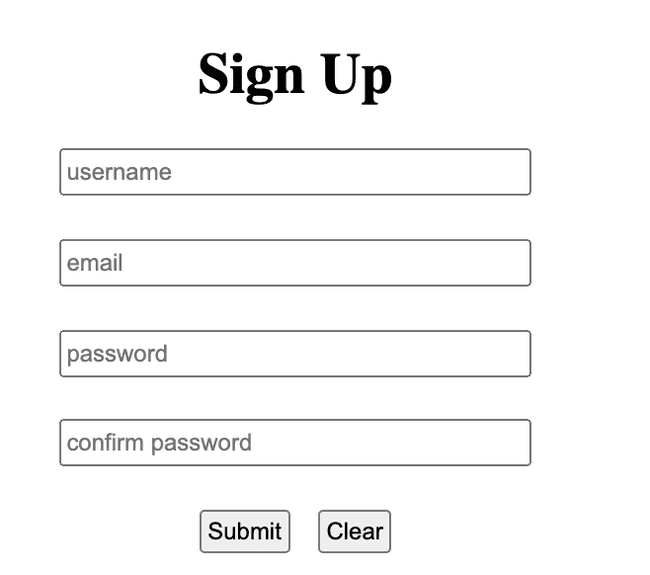 This looks fine. We created a state for each of the field. Then, we create handlers for changing each field, and two helper methods -- handleSubmit to construct an object to submit and handleClear to set all the fields back to empty strings.

However, what if I told you there is a built-in hook useReducer in React that could greatly simplify this process?

But before we look into how useReducer works, why don't we figure out how it works by ourselves and implement our own version of useReducer? We've implemented a custom hook and we know that custom hooks could give us unlimited flexibility. Can we implement our useMyReducer that works the same as the built-in useReducer in the example above?

We'll implement our own hook by inspecting the patterns useReducer has.

First, look at how the state is managed when using useReducer. Instead of creating a new state for each of the field, useReducer creates a central state object that organizes every field and passes the central object to the reducer. We can easily simulate this behavior using useState:

Since we want all above to be in our own hook, we can wrap everything into one hook function. Look at the declaration of useReducer(), we can confirm the return values to be the state, and the dispatch() function

We can try out our useMyReducer, click on the following demo to see the result:

When do you want to use useReducer?

Generally, the usage for useReducer could be summarized to the following three situations:

Look at the screenshot above, when the concept of state management hasn't been introduced, if you want to pass a prop message from the GreatGrandParent to the deep child Display component for showing the message, you need to pass this prop through all the ancestors of Display. This is the problem called "props drilling", where you have to pass a prop through several components in order to use that prop. Even though this still looks fine, it'll become more complicated when many components require props from GreatGrandParent and it could quickly become a mess. 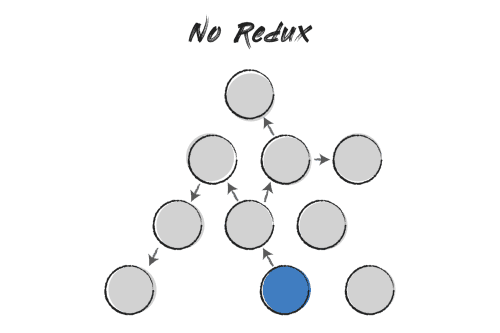 However, with the introduction of the state management tool such as Redux, all the components' states can be centralized to a structure called "store". It helps you manage the so-called "global state", and every time the global state gets updated, only the components that subscribe to the global state will be updated. This saves a lot of unnecessary overhead and development time. 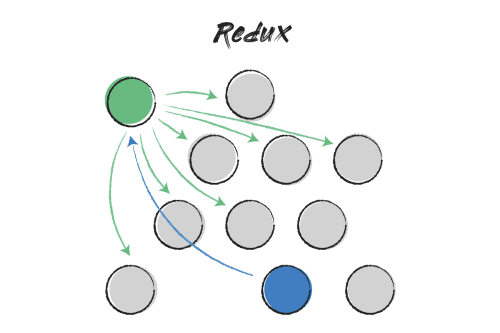 React Redux still remains the best tool for implementing the "global state management" (or a more accurate term, "flux architecture") for now. However, React has its own nice API for handling the global state management - Context API. With the introduction of useContext, this API becomes pretty easy to use in React functional components.

In our Display component, we extract from the context the state and the dispatch method, then pass the button an onClick function to update the message with dispatch.

However, this program has a potential flaw and may cause inefficiency. Could you tell what that is? (Hint: think of the condition when components get updated when using context)

Compare to Redux and other state management tools, useContext has several advantages:

However, the performance of the Context API is worse than Redux, and Redux has different middleware that supports many functionalities that the context API cannot do (e.g. redux thunk for async action creators).

As a result, the Context API is recommended to be used in the small or medium sized application, whereas Redux is still the most common tool for large-scale applications that require high-frequency state updates.