An overview of multi-threading

For the past decade, computer-makers have realized that there are physical limits to the performance of a CPU. At some point, newer CPUs can no longer process each instruction much faster than the previous generation of CPUs – and it is clear that we are nearing that point. The key to increasing computer performance then rests in the ability to process multiple instructions simultaneously by packing more “cores” onto each individual CPU, rather than making each core faster.

Unfortunately, programs designed to run on a single thread (or CPU core) are unable to automatically take advantage of the increasing number of cores on a system. One of the reasons for this is the problem of synchronization. Single-thread programs assume a linear order of execution; to wit, with the following piece of JavaScript code, we expect “Alonso” to be printed before “Bellinger.”

Now consider the case where this program runs in a multi-threaded fashion, with each of these statements running on a different core. There then would be no guarantee to the order of output: the first statement could finish later than the second, or it could start later but finish sooner, or it could even run just as expected, starting and finishing before the second statement runs. To recover the single-threaded behavior, we’d have to make the two CPU cores synchronize with each other before and after statement – which essentially defeats the purpose of using multiple cores. 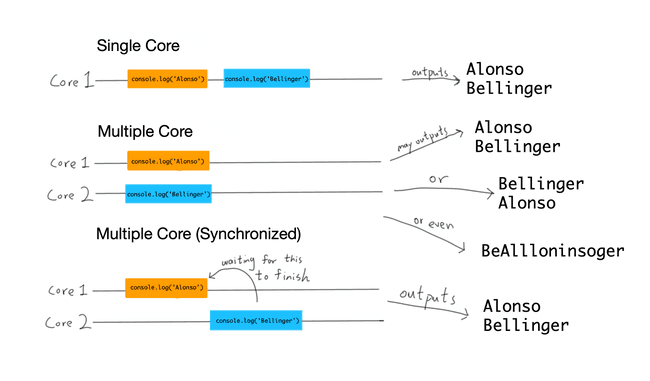 Many traditional languages like C, C++, and Java all support shared-memory multi-threading. In this régime, two threads belonging to the same program have access to the same variables. A thread can modify variables and other in-memory objects that belong to another thread.

Enough talk. Let’s spawn a thread in JavaScript. We will use the Web Workers API that exists in web browsers, though Node.js provides a very similar API through its worker_threads module.

Visiting index.html would result in the following being printed in the DevTools console:

When we get into the DevTools in the Sources tab, we see that there is now a “Threads” section there is now a worker. From now on, we will call the index.html thread the main thread, and the worker… the worker thread.

Recall from session 2 that every JavaScript environment in the browser has an event loop. If a task runs for too long, it could make the whole page unresponsive. Indeed, if we were to put an infinite loop in the <script> element in the HTML file, we do indeed see that the page stopped responding. The task on the main thread has blocked the event loop.

However, if we put the loop in worker.js instead, the page would still responsive. This tells us that each worker thread gets its own event loop.

As mentioned earlier, to communicate between threads, the Web Workers API generally requires the use of message-passing. Here’s an example.

We observe that every 500 ms (or every half-second), the text “Received message from the worker: hello world!” gets printed to the JavaScript console. Here, we are sending messages from the worker thread to the main thread.

We can send objects too, not just strings:

And now we see that the object gets printed to the console through the worker.onmessage function.

Let’s now try something a bit trickier. Let’s modify the object sent from the worker thread, in the main thread.

Question: Why is this the case? (Hint: this has to do with the fact that JavaScript does not use shared-memory multi-threading.)

Recall that earlier we mentioned that JavaScript in general does not allow shared-memory multi-threading. Whenever an object is sent from the worker to the main thread (or vice versa) as a message, the object is cloned (copied).

There still remain certain data types that cannot be cloned, like functions and Error objects. But that doesn’t seem too bad.

Having to copy things all the time seem quite wasteful. We must be able to think of something better that still avoids the synchronization problem, right?

With certain objects like ArrayBuffer objects (that just represent sequences of bytes), instead of copying it we could transfer the bytes from one thread to another. Let’s see it.

Here, no copying of the Uint8Array object is done (fast!). But we see that after the transfer arr becomes empty. This maintains the invariant (guarantee) that no two distinct JavaScript threads may access the same object at the same time.

Altogether, the process of sending a message could be summarized by the following comic: 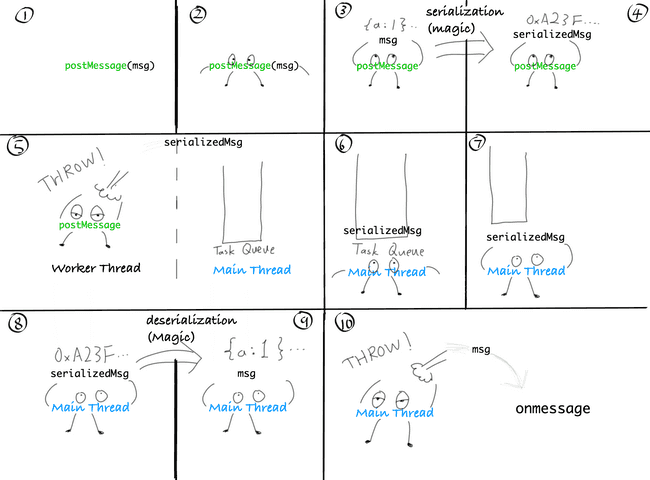 When should we use multi-threading?

This is, of course, the million-dollar question.

Question: Any ideas? What do we look for in an application for which multi-threading may be beneficial?

There are answers to this question that are programming language-agnostic, but let’s focus on the JavaScript-specific reasons.

Here are a few rules of thumb:

An example where Web Workers are used in concert with DOM APIs is PDF.js, a PDF viewer written by Mozilla in JavaScript and the default PDF viewer in Firefox. The hard-core file parsing and number crunching routines are all done on a worker thread. The results are then posted to the main thread, where they are rendered into DOM elements.

To help with the awkwardness of the postMessage() APIs, Google has created a library called Comlink that makes communicating with a worker as easy as calling an asynchronous function.

Google has also experimented with other worker-based technologies, like worker-dom, which provides a DOM for web workers to manipulate and then batches the DOM mutations to be sent to the main thread at once.